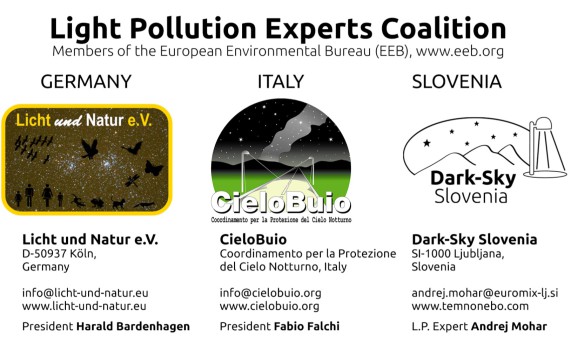 Lighting installation can only be qualified as Low Impact Lighting (LIL) if the target energy consumption in a given municipality per capita per year is lower than 15 kWh. This target value includes all losses on cables and also includes all outdoor public illumination (also facade illumination).

The Upward Light Output Ratio (ULOR) of a luminaire must be 0.0%. This needs to be valid during the whole lifetime of the luminaire and also when the luminaire is dirty.

It is not allowed to illuminate

The distance between poles must be at least 3.7 times greater than the pole height.

The luminance of the main roads in cities and towns is not allowed to exceed 0.5 cd/m2.

EN 13201 or national standards which are adopted from EN 13201 must not be implemented.

The Lifetime (MTBF-mean time between failure) of luminaires must be at least 100.000 hours or 25 years.

The minimum efficacy of a luminaire at full power needs to be at least:

A lower luminaire efficacy is allowed when the pole-distance: pole-height ratio exceeds 6:1 or when a mechanical shielding is necessary in order to reduce unwanted illumination of nearby houses or natural environment.

At least 70 % of the lumen output must target the road/street/walking area. Lower utilisation factor down to 40 % is allowed in following cases:

To secure the basic human right to sleep in a dark environment, which is important for good sleep, the maximum allowed illumination on windows after 22:00 o’clock (standard time) is:

Parking places on highways and other roads which are used for car drivers and truck drivers and where drivers may sleep in their vehicles may be illuminated but with the following limitations: